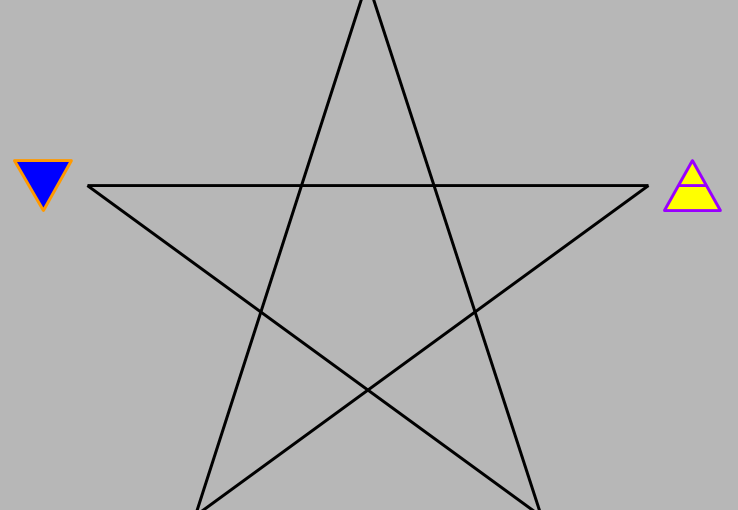 Pentagrams are one of the most versatile symbols used in the Western Mystery Tradition. Today they can be seen in the various Pentagram rituals stemming from the original Hermetic Order of the Golden Dawn including those found in Wicca and Thelema. Elemental, planetary and zodiacal workings may also employ the pentagram or when working with spirits. Their use as amulets of protection can be traced all the way back to Sumeria and Babylon. There are several interpretations of the use and meaning of the pentagram and hopefully the following will add a different perspective.

Most practitioners of the Western Mystery Tradition are taught one form of the Lesser Banishing Ritual of the Pentagram (LBRP) at a pretty early stage in their magical work. This a wonderful ritual and is truly a masterpiece of ritual for its ability to balance, protect, expand the aura and build a rapport with the Archangels of the Cardinal Directions. It also lays the groundwork for more complex versions of this ritual to work with elemental, planetary and zodiacal energies. But what about the correspondences of the Pentagram symbol? Many would say it is the elements ruled over by spirit, as a fifth element. A further question though would be why are the elements ascribed to those points?

In a previous post on the Natural Order of Elements another way of working with the elements was suggested. This order went according to density of the elements and seemed was used from the renaissance until the late 1800s in magical circles. The order, highest to lowest, fire, air, water, and earth. This order was attributed to the Tetragrammaton by several streams within the tradition. There were many reverberations that rippled out from changing one single correspondence as seen in the order of elements. A slight modification of the pentagram is following one ripple to a small wave.

Pentagrams in the Western Mystery Tradition are assigned to the elements by following the pattern of the divine name Pentagrammaton, or in Hebrew, Yod, Heh, Shin, Vav, Heh. The Pentagrammaton is not the name of Jesus translated from Hebrew. It is a Qabalistic formula created during the Renaissance as a symbolic representation of Jesus, by placing the letter Shin in the middle of the Tetragrammaton. It is, for lack of a better word, a magical formula. If you are not sympathetic to Christian symbolism please note this isn’t the only interpretation of the pentagram but more of a quick origin story of the assignments of the elements. In this way of thinking Jesus was the sacrificed Son of God and the one who brought renewal and balance. Some streams of the tradition call him the Divine Repairer. There are many other stories that fit this theme of sacrifice, renewing and balancing creation throughout the world.

When one follows the natural order of elements and then places them on the pentagram a slightly different version emerges. The diagram to the right shows the placement of the elements as they would appear using the 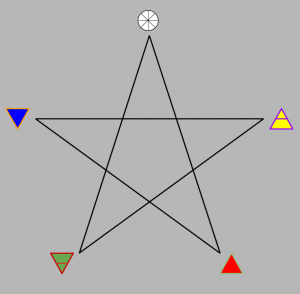 natural order of elements arrangement. On the right lower hand side is fire, upper right is air, spirit in the center top point, the upper left is water, and the lower left is earth. This places the more active elements of fire and air on the right hand side and the more passive elements of water and earth on the left. In this configuration emphasis is placed on balancing the two sides of the pentagram by the intercession of spirit. This seems to agree with the meanings of the Pentagrammaton, in regards to balance and reconciliation.

Qabbalistic diagrams of the tree of life will place three pillars to demonstrate which sephiroth are generally active, passive or reconciling. The main idea is there are two opposing forces and one that reconciles them. This is heard many times in the different initiation rituals throughout the Western Mystery Tradition. The white pillar is active, the black pillar is passive and the gray pillar is the reconciler between them. The diagram below has two pillars added to the pentagram to use this idea of opposites and a reconciler. The middle pillar was not added for aesthetic reasons only, but it would run right down the center where the top point attributed to spirit is. 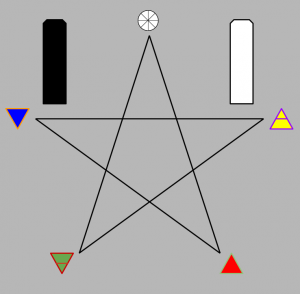 Esoteric anatomy in general has the right side of the human body being more active and the left being more passive while the center in turn is considered neutral. This is also seen in alchemical art where the Sun is on the right and the Moon is on the left demonstrating the same idea but in different symbols. The modified elemental order attributed to the pentagram over the human body also aligns with the right being active, the left passive and center as a reconciler on the human body. It is important to keep the general flow and symbols consistent throughout a system. Harmony isn’t fond of dissonance.

One issue that may arise if one uses the modified elemental attributes is the pentagrams for spirit. These are made by starting at either the fire or earth points and is drawn going to the opposite side of the symbol. An example of an active pentagram of spirit using the modified attributes would be to start at fire, then over to water, to air, to earth, to spirit and then back to fire. The passive would be to start at earth and follow a similar pattern from the other side as noted above. This version places the emphasis on reconciliation of the opposite elements, for example, fire and water with Spirit as the force reconciling them.

Below are two exercises, the pentagram for protection, and active and passive breathing exercises. The fourfold breath, found in many books on the Golden Dawn, would be the reconciling breath.  They are both a combination of exercises learned and used from different orders and schools over the years and can be found in several sources.

The above exercise is a good idea to use if you are about to go into a situation where you know there may be harmful energies, entities or people. If you are not comfortable using Qabalistic names then just see the white flaming pentagram by itself.

Please note the counts below should be followed as best you can. They should not be strained and should be modified to your best comfort level.

This works great when you need a little extra energy or when waking up. At first your arms and shoulders may get tired holding this pose. If this happens then take a break. You will be able to do this longer if you persevere. 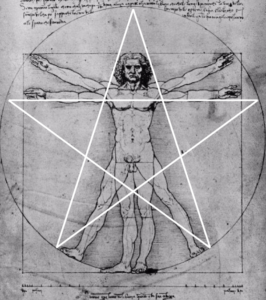 This is a relaxing and calming technique. It can aid you in falling to sleep and calm down in general. It will also give you a strong sense of a maternal secure feeling as well.