In the previous post, the Natural Order of the Elements, it was seen that there are reverberations regarding correspondences throughout a magical system of placing the elements in their natural order. It must be stressed that one set of correspondences should be consistent throughout a system. Magical systems throughout time have observed the natural world and what was within the magicians themselves. That being said, one of the first issues that comes to the forefront is the attributions of the 4 lettered name of Omneity, the Tetragrammaton, to the elements.

The Hebrew Kabbalah formed a large part of what we use today in the Western Mystery Tradition under the title of Hermetic Qabalah. Interestingly, in many forms of Hebrew Kabbalah the natural order of elements was adhered to. It would be natural that this same order would also be followed regarding an entire set of correspondences within a system of practical magic. It will help tremendously to start with the Tetragrammaton in Hebrew- Yod Heh Vav Heh – יהוה. Hebrew is read from right to left.

The attributions of the Tetragrammaton used in this entry are seen in several other schools of Qabalism but seem to not be used in those descended from the Hermetic Order of the Golden Dawn and its subsequent daughter Orders. Those Orders offer decades of study and practice and have set the precedence for how the modern magician, regardless of their particular beliefs, lives and practices magic. Whether it is the pentagram ritual and all its many variations, the Qabalistic Tree of Life, the Tarot, and more, the influence of the Hermetic Order of the Golden is there. It’s gotten to the point where it is actually a bit difficult now to find sources out there of Western Magic that do not in one way or another repeat what was taught by this group. That being said, looking at earlier sources, pre-1888,  or traditions that have run parallel to the Golden Dawn, seems to enrich the tradition rather than take away from it. Let us first look at this excerpt from the Neophyte Initiation Ritual of the Golden Dawn (https://hermetic.com/gdlibrary/bb/neophyte).

Hiero: Very Honored Hiereus, how many chief officers are there in this grade?

Hiero: Is there any peculiarity in these names?

Hiereus: They all commence with the letter H.

Hiero: Of what is this letter the symbol?

Hiereus: Of life, because the character H is one Mode of representing the ancient Greek aspirate; Breathing and Breath, are the evidence of life.

The above follows immediately after the Lodge has been deemed to be secure, meaning that only those who have been initiated and are a part of the Order are in attendance. The letter H here in Greek is the letter Eta- Η, a long e sound. In Hebrew the letter H is represented by Heh-ה, a soft H sound in English. Heh is the 2nd and 4th letter of the Tetragrammaton or unpronounceable 4 lettered name of the most high God. Eta and Heh don’t sound all too much alike in English. Eta usually corresponds to the ancient planet of Venus and not to life as stated above. The author of the Cipher Manuscripts, which this ritual is based on, may not have had access to this information at the time it was written down. We do know that Heh was well known to the founders of the Golden Dawn, somehow though the ritual and their correspondences to Heh in subsequent material corresponds to the element of Water. There are many explanations that have been passed around over the decades in different materials and lectures, and it is up to the reader to search for those themselves. The Fool of the Tarot has an important lesson regarding research via Paul Foster Case. The white dog nipping at the Fool’s heels is our intellect and rational mind that has evolved to keep us from falling off the cliff and to guide us. The white dog is pulling us from peril.

Hebrew Kabbalah is the mystical and esoteric aspect of Judaism and it should be noted any pronunciation of the Tetragrammaton is usually considered taboo except for seldom occasions and persons. Respecting another’s religious, mystical, magical and esoteric beliefs is an important part of being an initiate and should be treated with care. It’s always been somewhat interesting to see Non-Jewish magicians not pronounce the Tetragrammaton and just the names of the Hebrew letters. The “Gnostic” name of the Divine, IAO, has been posited as a Greek attempt to translate and pronounce the Tetragrammaton. There is also Yahweh, Jehovah and Yehovah. One translation is Yehowah with an emphasis on the Vowels. An excellent history of this version in the Western Mystery Tradition can be found in John Michael Greer’s Circles of Power. Vibrating Yehowah, say during a Lesser Pentagram Ritual, is very potent. Emphasis on the vowels gives the sounds Yeee Ohhhh Ahhh. This sounds like early Greek attempts at translating the Tetragrammaton found in several texts on Gnosticism. The Vav ו here is pronounced Waw. 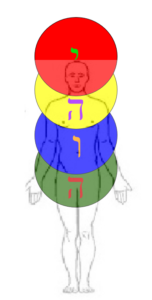 ה-Heh- Air- Briah- The World of Ideas in their purity without form, much
like air

ו-Vav- Water- Yetzirah- The World of Formation and ideas taking form and shape, much like water taking on the shape of the vessel it is in

The first Heh in the above list, is aligned with Air and the chest, home of the lungs in the physical body. Heh also has the added correspondence of window and its links to the air outside. The Vav is in turn is aligned with water and is placed over the abdomen, home to the watery aspects of the body. Vav also has the correspondence of nail or a fastener. Water, or liquids in general always connect things within the bounds of its container, much like the world of Formation as stated above.

Observing the world of Nature and aligning our magical and mystical practices to it leads to a harmony with the universe and within ourselves so that we may pursue the Work in strength, wisdom and love.

One thought on “The 4 Lettered name and the Elements”