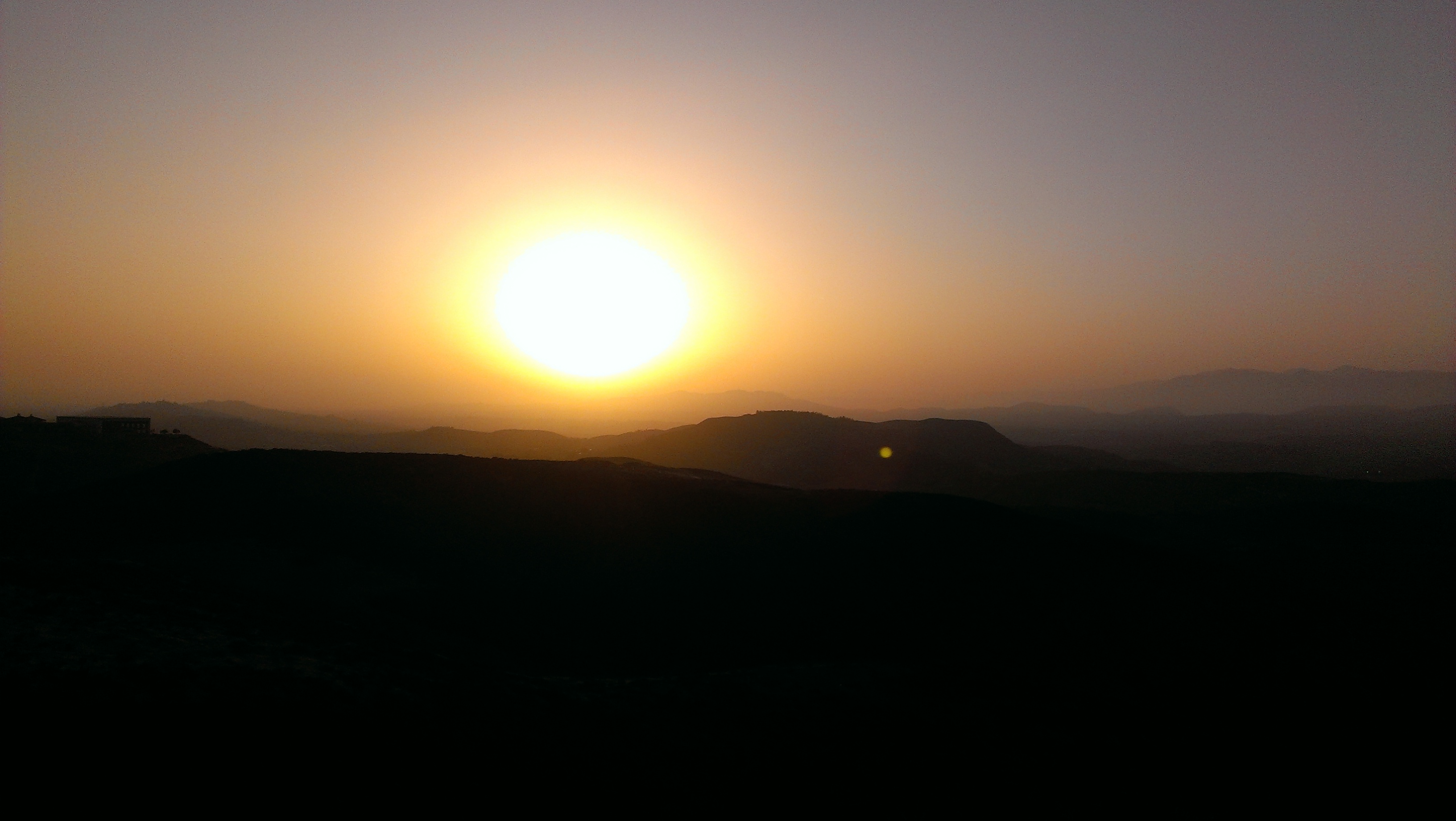 The following exercises are an adaption from other works in the tradition of the Golden Dawn, such as those suggested by Israel Regardie’s “The One Year Manual”. There have been other variations of these exercises inspired by the teachings Paul Foster Case, that as far as is known, have not been published. The ones below use the correspondences of the four quarters aligned with those from the Sepher Yetzirah concerning the mother letters in relation to the elements of air, fire and water, and the corresponding areas of the physical body. The versions mentioned above all use a prayer of either an Egyptian or Astrological nature. No prayer has been given in the ones given below. If one were following an Esoteric Christian path, suggested prayers would be the Lord’s Prayer at Sunrise, the Jesus Prayer at Noon, the Hail Mary at Sunset and the Glory Be at Midnight. Meditating on the meanings and events of these prayers, as with any others you are inspired by, will allow one to find their links with the times of day such as who is saying them and to whom, which aspect of the male, female, and reconciling energies are being invoked.

The rationale behind the use of the solar adorations is to allow one to attune with the consciousness of the Sun, the Logos of our solar system. After using these adorations for a time, and it varies depending on the practitioner, one will get a sense of feeling in sync with the Sun, not only on a daily cycle, but a yearly one as well. This exercise is highly encouraged as it creates a connection to the Invisible Worlds as well as the symbolism of the Sun. It is suggested to also meditate on Tifareth and its symbolism. Aligning these adorations with the cycles of life and the seasons of the year helps to enrich these simple rituals.

The use of the elemental grade signs from the Golden Dawn and its offshoots, when done according to the diagrams below, creates the space where the elemental symbols are to be placed. It is advised to physically perform each one and stand in the elemental grade signs a few times before doing the adorations. Close the eyes and feel what is happening in the physical and etheric bodies. While performing the 2=9 sign you will feel the chest expand and open up. Performing the 4=7 sign gives a sense of concentration and warms the entire body. The 3=8 sign has a calming and cooling feeling. The 1=10 sign is very stabilizing and has a sense of collecting or congealing the day’s energies. Experiment, experience and discover this for yourself. Approach these exercises in a scientific manner and experiment with them keeping an open mind and feeling what each sign is doing. Always record your results, the conditions, and the times they were performed at during the initial few weeks. See John Michael Greer’s “Circles of Power” and Donald Michael Kraig’s “Modern Magick” for further use and information on the grade signs and their uses.

The times of day below are guidelines. The signs can be seen in the diagram below from Israel Regardie’s “The Golden Dawn”. 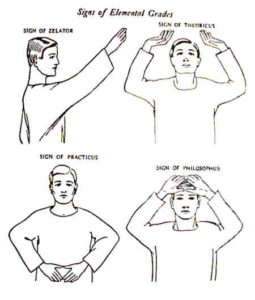 Sunrise- Face the East and make Theoricus sign. The fingers should be pointed behind you and parallel to your ears. See the Air symbol 🜁 in the chest in bright glowing yellow. Take at least 3 deep breaths and feel the element of Air energizing your whole chest area, your cardiovascular and pulmonary system while holding the sign. Feel the reconciling, male and female energy of balance flowing through your entire being. Make the sign of silence.

Noon- Face the South and make the Philosophus sign. The feet should be spread apart, heels together, at a 45 degree angle.  See the Fire symbol 🜂 flaming in red with the bottom of the letter running just above the top of your eyebrows. The symbol should sit within the triangle created by your hands making this sign. Take at least 3 deep breaths and the element of Fire energizing your brain, nervous system and entire head area while holding the sign. Feel the male energy flowing into and through you. Make the sign of silence.

Sunset- Face the West and the make the Practicus sign. The feet should be spread apart, heels together, at a 45 degree angle. See the Water symbol 🜄 centered over the navel, in bright watery blue, centered in the triangle made with your hands. Take at least 3 deep breaths and feel the Water element energizing your entire abdomen and all the liquid processes of the body while holding the sign. Make the sign of silence.

Midnight- Face the North and the make the Zelator sign. The hand should be turned palm up and the arm slightly bent at the elbow. See symbol for Earth 🜃 over the legs and feel all the solid aspects of you being energized. Take 3 deep breaths while holding the sign. Make the sign of silence.