One of the most popular areas of mystical or esoteric studies is the subject of Chakras. A quick search and you will find a plethora of books, blog posts, websites, etc. all offering slightly different approaches mostly based on “Eastern” points of views. There are “Western” ways of activating the chakras, or energy centers, and this post will cover one way of doing so.

What is a Chakra? Following the link above you will find several variations depending upon the specific system. The one description that is consistent is that they are wheel like energy centers found within the subtle body of the human being. The number seems to vary anywhere from 4 to 7 major energy centers located within a central column just in front of the spine. They all also acknowledge that there is an invisible energy circulated throughout the subtle body energy system as well as other points or minor chakras not found along the central column. 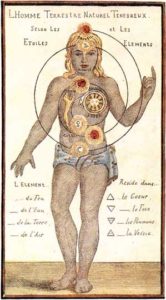 The Western Chakra system, as approached here, was inspired by the diagrams of Johann Gichtel, the works of Louis Claude de St. Martin and Martinez de Pasqually as applied to their teachings on Reintegration, and Rudolf Steiner, specifically his lectures on an evolved chakra system starting from above to below as recorded in his Michael writings. The Hermetic Order of the Golden Dawn’s Practicus grade diagram of the 7 planes attributed to the Tree of Life, as seen in the diagram below has helped to create a bridge between the Qabalistic Tree of Life and a Western Chakra system. 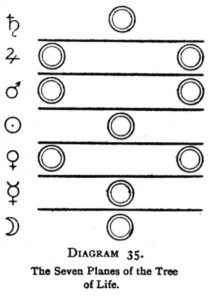 A Chakra system based on the number 7 has several manifestations in the Western Mystery Tradition. These can be seen in the practices of B.O.T.A., Fraternity of the Hidden Light, A.M.O.R.C.,  Temple of Witchcraft, O.T.O., The Order of the Temple of Astarte, as well as many others. The Hermetic Order of the Golden Dawn and the Aurum Solis also have their own versions of awakening the energy centers but these are based on 5 and 6 centers, respectively. The approach given here works with the number 7 because of its correlations to the double letters of the Hebrew Alphabet, the Planets of the Ancients, the 7 heavens, the 7 Planes and the 7 Greek Vowels.

The order of activation follows the order of the Celestial Spheres following the Sidereal Cycle, the observed speed of each planet passing over the Earth. This same order can be seen in the diagram “The 7 Planes of the Tree of Life” from the Golden Dawn, to the right. This has been done to keep the order of the planets consistent with the chakras, and human observation of the planets of the ancients from our place here on Earth. It is worth noting that the Celestial Spheres, the 7 heavens, and the 7 planes are nicely aligned with one another without any large inconsistencies.

In regards to colors and the different chakras, it should be noted that the ROYGBIV (Red, Orange, Yellow, Green, Blue, Indigo, Violet) correspondences is one Western Interpretation of the chakra colors. One school assigns blue to the brow and orange to the heart center while another follows the ROYGBIV sequence but places the chakras in the area of the associated glands. Looking at the wikipedia entry for Chakras you will also see several different systems with different correspondences amongst the Eastern Schools. Aligning the chakras to the ROYGBIV sequence of colors in the West can be traced to Arthur Avalon in the Serpent Power as well as to a source in the 1970s on Nuclear Spirituality (title could be incorrect) and the visible light spectrum. Either way, the ROYGBIV colors and the chakras have become strongly associated in Western Culture, and have been found to work well and give results over the past several decades.

One reason to work with the visible light spectrum of colors and the chakras is it acts as a bridge between the higher and lower wavelengths in the Electromagnetic Spectrum. From the human point of view the visible senses operate in this range in our regular state of consciousness. Activating the chakras using this order of colors helps to reinforce the idea that we as Human Beings act as bridges between the worlds Above and Below. The Rainbow in Mythologies across the globe reinforces this idea, with the practitioner as a messenger between the worlds.

The more common associations of the planets with Chakras using the ROYGBIV colors can be found in the New Age versions of Chakra Activation. In some cases this can lead to associations that may not be completely healthy. For instance, associating the Heart center with Venus because this center is Green may seem good at first, however, if you dig deeper the heart center has more to do with Harmony, Self-Sacrifice, and being a center of universal unconditional love rather than an emotional and erotic love that’s associated with Venus. Assigning the Chakras to the ascending order of the planets starting with the Moon at the root chakra and working up to Saturn and the Crown Chakra, as seen in the diagram on this page, is worth meditating on. It should be mentioned that the sephiroth are not the planets, but share similar traits. An important point to meditate on while examining this method.

Vowels sounds have been a part of chanting for mystical purposes across the globe as far back as we have records in both the East and the West. It has been pointed out in several places that the Chakras are not fully activated unless the use of sound has been used.  The Greek Vowels are easy to vibrate and form a link with a more primordial aspect of the Western Mystery Tradition. For an English speaker the Greek Vowel sounds usually resonate well because English uses forms of these vowels in daily language. They are associated with the planets in the ascending order from the Moon to Saturn but are general enough so that a practitioner from any tradition in the West can use them. Using the Eastern “Seed Syllables” or vowels is perfectly fine if you are following an Eastern Path but mixing an Eastern and Western system may prove to be difficult and daunting. Whichever system you use and how you use it, always follow the guidance of your Higher Self as to what works best for you.

The method below has been used for 7 years with harmonious results within the framework of a Western Path. In personal practice it has taken the place of the Middle Pillar Exercise, familiar to those working a system based on the Hermetic Order of the Golden Dawn. It is important to not skip steps in this exercise, because the energy needs to go from top to bottom so as not to become unbalanced. 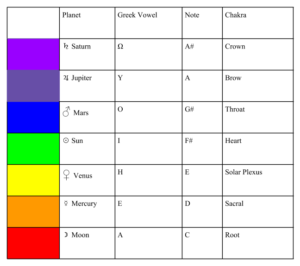 3 thoughts on “Western Chakras: Ascension of the Inner Holy Planets”